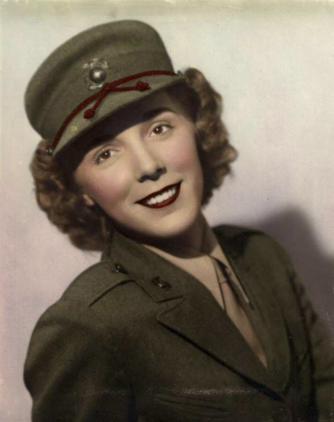 In 1943, The Victor Cafe was so blessed to welcome a special guest - Lois Winter | Women's Marine Corps. Her daughter was so kind to share her mother Lois' special letters addressed to "Mums & Dad," describing her experiences in Philadelphia & at the Victor Cafe. Below you will find a short note from Kim Pearson, Lois' daughter, followed by Lois' magnificent letters!

"My mother Lois Winter served in the Women’s Marine Corps during World War II. She grew up in a small town about 50 miles outside of Seattle, and when she enlisted she was 21 and had never been farther from home than Oregon. She was stationed first in Washington DC, and then in Philadelphia. As you can see from her photo, she was a lovely young woman and was popular with the servicemen who were stationed there, most of them a long way from home too. It also helped her popularity that she was that rarity at the time – a woman in uniform.

She wrote home often, sharing her adventures with her mother and father. Luckily for us, her mother kept these letters, and gave them to Lois when she died, who also saved them. When Lois died in 2009, we found a huge stash of letters in a box in her closet.

Here are two excerpts from letters describing her experience at The Victor Café. Although I have never been to your café, or even to Philadelphia, I feel like I have been there too." - Kim Pearson

One of the boys in submarine school, named Hilly, asked me out. His father was one of the admirals stationed in Pearl Harbor when it was bombed. This young man took me to a special restaurant in Philadelphia that he had discovered. I’m telling you, we had a night to remember.

We got in this taxi and went down to the industrial section of town, where there seemed to be nothing but dark buildings and deserted streets. Then in the middle of nowhere we stopped in front of this big old dark building. On a side door there was a tiny red neon sign which said something in Italian.

But when we opened the door and went inside – it was filled with music and color and people talking, laughing and singing – it was alive! The maître d’ was singing an aria from an Italian opera in this huge baritone, just booming it out, and the waiters were singing, and the customers were joining in singing. Opera was everywhere! The walls were covered with pictures of famous opera singers, and everyone was having wine and spaghetti, and oh, the noise was incredible. It was like walking onto a lighted stage right in the middle of an Italian opera.

We sat down in the middle of the room and just drank it all in. Hilly was so entertaining; he was a gifted conversationalist, and he loved music, so you can imagine how much fun I had. Then we had to leave, because it was getting close to curfew, even though the restaurant was still hopping.

Hilly was still singing away when we got into the taxi. He was singing a Russian song, and would you believe it, the taxi driver just happened to be Russian and started to sing along! The driver told us about himself, how he had emigrated to the US, and had just recently become a citizen, and how he too liked to sing. So he taught us some Russian songs, and the three of us sang all the way back to the hotel. What a delightful night. Well to begin with the daily events. Monday was a quiet evening for us, but on Tuesday “Hilly” my ensign called for a date Wednesday. So Wednesday night Hilly came up and he had his car with him, a long back shiny Buick, mmm that was nice in itself.

Well we went to Victor’s as I knew we would, you remember me telling you of the quaint old Italian café where we went before. We listened to beautiful music, talked, drank wine and ate spaghetti from about eight thirty till twelve thirty. I even sang some opera! Hilly said I sounded good, but I think he was only being nice. Still, what a great evening. I love going there.

She always signed her letters to her parents as: